Ah, January.  Aside from being the first of the year, there really isn’t much going on this month.  I know NASCAR starts it’s season in a few weeks, February 14th.  That is something to get excited about.  Especially, since they have changed a few of their rules.  Apparently,  fan interest was way down, so, the ‘powers-that-be’ decided, one, that bump-drafting will be more tolerated, and, two, restrictor plates will not be limited, as they have been, at the super speedways.  Basically, this amounts to some edge-of-your-seat racing excitement.
Officials had imposed the limits for safety reasons, but, the rulings seemed to make little difference.  There were limits placed on how much the drivers could bump and nudge each other.  At Talladega and Daytona, because they are such large tracks, restrictor plates were initiated back in 1989.  The restrictor plates were intended to cut down on horsepower, thus, speeds, in an effort to cut down on the number of bad wrecks.  The drivers feel they should be capable of policing themselves.  So, we are going back to some good old bang ’em up racing – hopefully!
When ‘Winston Cup’ became NEXTEL Cup and racing came to be so commercialized, I all but stopped watching it.  The races had become boring with all the restrictions, as well.  It sounds like I was not alone.  Now, maybe, the races will be exciting, once again.  I started watching racing way back in the ’80’s, but, lost interest a few years ago – about the time Dale Earnhardt was killed.  Maybe, I will give it another shot this season.
The past week has been a doozy.  I developed a headache last Thursday – exactly one week ago.  It was all-over my head, but, primarily, at the base of my skull.  It was hard to deal with, especially if I had something I wanted to do.  I had no patience, what-so-ever, because of the discomfort.  I don’t normally get headaches.  So, I broke down and made an appointment with my doctor.  My blood pressure was through the roof!  I’m not sure if that is what is causing the headaches, or not, since I had been in a rear-end-hit auto accident a couple of years ago.  I’m supposed to monitor my BP for a month, then, go back to see the medicine man.  I have never had a headache like this, or, one that lasted this long!  Enough, already!  A month?!  LOL
I have also been trying some new things in my designing.  For most of my art, I have tried to stay within an ‘acceptable’ format.  You know, one that offends the least number of people.  LOL  I have a tendency to play it safe.  It isn’t that I want to offend anyone.  It is just that, after I make something, I stop and check it to make sure that it will be accepted by the masses.  Phooey!  I plan to lift my own restrictions and let it flow.  I am so in the habit of trying to please everyone that I feel I have seriously limited my abilities.  Sounds like “Garden Part” by Ricky Nelson, eh?  You youngsters, Google it.  LOL
Last year, when I bought my newest camera, I planned on taking shots of textures and patterns to be used in my art and scrapbooking.  Now, I am trying to incorporate these images into my designs, not just the backgrounds.  It is coming along, nicely, too.  Though I don’t have anything ready to share as of yet, I did some experimenting and have some papers to give you.  They aren’t anything spectacular.  I have to learn to walk before I can run.  LOL  With these, I worked on technique.  As I get more comfy with that, I will begin applying it to some designs.  I thought perhaps someone might like them or be able to use them.  Click on the preview, below, to go to MediaFire to download.

In my last post, I showed a layout that I had done of little Kaleb napping.  I thought perhaps someone might be interested in the branch with hearts/frames.  So, I have also placed that for you to download, as well.  Here is the preview and, of course, click on it to go download. 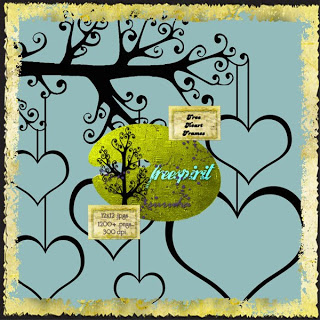 Here is the layout with Kaleb so you can kind of see what it looks like with photos.

Here’s to hoping you all have a great week and weekend!  Thank you for your interest and keep smiling!
Hugs,
Su

10 thoughts on “Freebies, NASCAR and a Real Pain in the Head”

This site uses Akismet to reduce spam. Learn how your comment data is processed.