Here’s hoping everyone had a wonderful weekend.  It was sure lovely here in Florida.  Until the (tornado) storms.  The news called it a storm, but, as it was coming through, there were tornado warnings.  The storms are the same ones that swept through Mississippi, killing something like 10 people, a day or so prior.
I don’t normally get concerned over high winds and storms.  You do what you have to do to protect yourself and the rest is out of my control.  This one was wierd.  I was trying to nap.  I hearn what sounded like someone running water full blast.  But, when I looked up at the window, insyead of seeing the tops of trees, it was solid grey!  I jumped up and went to the children, who were starting to freak out.  We gathered in the center hallway of my house, where overhead supports would protect us the most from falling ceilings.  It didn’t last long, but, long enough to scare the pee out of the family.
When the wind and rain settled down, we ventured outside.  The first thing we say was my neighbor’s house.  An huge oak tree was felled on top of the roof, covering almost the entire house.  I ran over there knocking on the door and calling out, but, they weren’t home.  The first photo is his roof from my yard.  It is visible just above the fence. 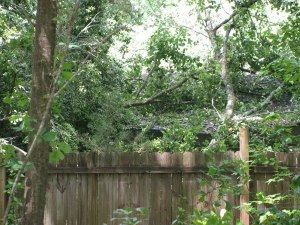 This is the base of the huge tree that fell on his house: 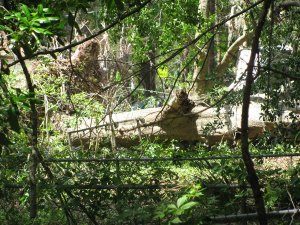 And, finally, this is what fell in my yard.  These branches just missed the children’s tramploine: 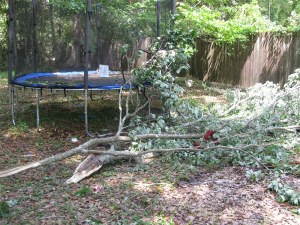 We were really fortunate.  The worst part was not having power for a couple of hours.  The storms came through around 2 in the afternoon.  At 10 o’clock last night, crews were still clearing a portion of street by my house.  Trees and power lines were felled all over the place.  Our power was out until about 5 in the afternoon, so, about three hours without power.  My daughter took the little ones and drove around a bit.  By this time, people had located the obstructions and were working to clear them.  Otherwise, her jaunt could have been a bad move.  One thing that was noticeable everywhere you looked.  Little sprigs of new growth from the trees were all over everything.  It was almost beautiful.  Imagine a rain where sprigs of greenery fell instead of water.  That is what it looked like.  It’s pretty much all blown away or I would get a photo of that.
Sarah had just cleaned the pool and got it all set up again for the warmer days.  Now, look! 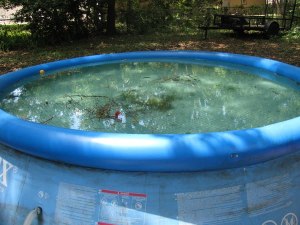 I’ll say it again,  “We were blessed!”
I had joined in on a progressive scrap at another site.  I went through the entire week of adding all the goodies.  It turned out really nice.  But, I missed turning it in on time.  I didn’t want to waste the layout, so, here it is:

This site uses Akismet to reduce spam. Learn how your comment data is processed.